"What is our kind? In serving the Sarafan, I have protection, I have power. And who better to hunt down a vampire than a more powerful vampire? History is written by the winners, Kain. That is my kind"
―Faustus[src]

Faustus was a major character in Blood Omen 2, he was originally a Legionnaire in Kain's vampire army, who pledged himself to the service of the Sarafan Lord and the Sarafan after the defeat of Kain's army.[1] When Kain returned two centuries later, Faustus was the first traitor vampire and Boss enemy that Kain faced, in Chapter 2:The Smuggler's Den; gaining from him the Dark Gift Jump.[2] Faustus was voice by Philip Proctor.

Faustus was seen only in the fourth timeline that gave rise to Blood Omen 2. As such he was likely sired by Vorador some time between the Collapse of the Pillars and the rise of Kain's vampire army.[3] When Kain's Vampire Army rose to power and began to conquer Nosgoth, Faustus was a 'Legionnaire' in the army, who was seen to take part in the massacres that led towards the battle of Meridian in the Blood Omen 2 opening video[BO2]; Kain described him as an "indifferent soldier".[1]

Faustus was one of the few of the later 'Traitor vampires' that actually took part in the battle of Meridian(many of the traitor vampires are seen in the opening video, though their attendance is contradicted by later dialogue). Accordingly Faustus was defeated by the Sarafan troops and once the battle was over, he offered his services to the Sarafan Order, likely saving his life and allowing him some measure of protection and power in the Sarafan's new Nosgoth.[1] In the centuries that followed, Faustus aided the Sarafan in hunting down Nosgoth's remaining Vampires, actions he felt no regret for.[1] He may also have gained some type of territory in Meridian, (as he was seen exclusively in the Slums and Smuggler's Den) [4]

Two centuries after the battle of Meridian, Kain returned, revived by the Vampire resistance, the Cabal. After being 'trained' by Umah in Chapter 1:the Slums, Kain was separated from his guide and sent to follow a 'paper trail' of Cabal contacts to uncover the location of Sanctuary, the home of the Cabal[BO2]. At the end of Chapter 1:The Slums, Kain met a Cabal Contact at the Grand Hotel . Unbeknownst to the both Kain and the contact, Faustus had been following Kain's progress and using his Jump Dark Gift, had hidden behind the staircase of the Grand Hotel and observed the conversation. Once the contact had opened a gate and allowed Kain access to Chapter 2:The Smuggler's Den, Faustus used his Dark Gift to perform a jumping attack on the contact, killing him[5][6][BO2]. It is unclear if Faustus relayed the news of Kain's return to the Sarafan Lord, before following Kain to the Smuggler's Den .

In Chapter 2:The Smuggler's Den, Kain's progress was again shadowed by Faustus. Once Kain got to the industrial complex near the Smuggler's Tunnel, he was able to observe (but not identify) Faustus from a distance conversing with a Glyphwright[7] (Kain could later approach this platform but it was empty)[BO2]. Reaching the end of the Industrial complex, Kain entered a large vented room, where Faustus taunted him from a balcony above the room, before dropping down and facing Kain in combat.[1][8] 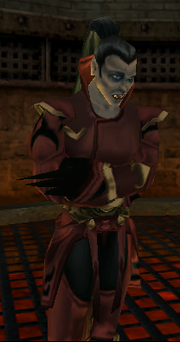 Once Kain had defeated Faustus, he was able to drink his blood and 'absorb his veins' gaining the Dark Gift Jump,[2] which enabled him to cross to the Smuggler's Tunnel and enter Chapter 3:The Lower City[BO2].