Nosgoth is an upcoming free-to-play multiplayer action video game, developed by Psyonix and published by Square Enix Europe through Steam for Microsoft Windows. Since February 2014, it has undergone closed beta testing, but its release date is unconfirmed.

Though not nominally promoted under the Legacy of Kain banner, Nosgoth takes place in the existing continuity and eponymous setting of past games. Within the series, it sets multiple precedents; developed without the direct involvement of Crystal Dynamics, it is the first Legacy of Kain spinoff and multiplayer title, establishing a new branch in the franchise.[Eidos-Monkeythumbz] The game's backstory bridges gaps between the opening events of Legacy of Kain: Soul Reaver, and revolves around a new War for Nosgoth waged among the vampires of Kain's empire and their human adversaries. Players control, and switch between, both races in a variety of team-based gameplay modes, competing to score points, accumulate currency, gain experience, and improve their characters with each match.

As the first Legacy of Kain-related title to emerge in almost a decade, Nosgoth was revealed in 2013 to controversial reception, with criticism focusing on its conceptual departure from the series' narrative-driven formula.[Eidos-Monkeythumbz][SEF-Monkeythumbz] Shortly following its announcement, it was discovered that the game had originated as the multiplayer companion to a traditional single-player project, Legacy of Kain: Dead Sun, cancelled in 2012. However, Square Enix Europe stated that the finished product would be largely independent of Dead Sun.[Eidos-Monkeythumbz][NeoGAF] They explained their intentions for Nosgoth to introduce the series to an expanded audience, and emphasized that, as a live game, community input would influence its future direction and development.[NeoGAF]

"Hundreds of years of conflict and hatred. Each race pitted against the other. For supremacy, for survival. This is the war for Nosgoth."
―Nosgoth official website[src] 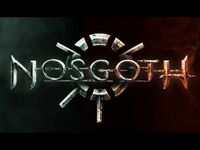 This page is about the upcoming Legacy of Kain game. For the series' setting, see Nosgoth.

Nosgoth chronicles a previously-unexplored span of time in the Soul Reaver era: the centuries between Raziel's execution and Raziel's resurrection, both events originally depicted in the introduction to Legacy of Kain: Soul Reaver.[SR1-C1]

Since the collapse of the Pillars and the holy war, Nosgoth's oppressed human population has carved out a harsh existence in slavery and exile, largely relegated to life as food in blood farms. The land's emperor, Kain, and the Council – his six lieutenants – reign over the heartlands with their vampire clans.[1] When Raziel, Kain's first-born lieutenant, betrays his master, Kain condemns him to execution in the Lake of the Dead.[SR1-C1] Before long, however, Kain himself disappears, abandoning the empire. Using the Chronoplast to travel through time, he departs in search of a means to restore health to the corrupt Pillars of Nosgoth, and the world itself.[NeoGAF][SR1-10][TLW-JRK]

Scenes of battle in the war for Nosgoth.

Kain's surviving lieutenants remain to shepherd the decadent realm, but quickly succumb to mistrust, infighting, and, ultimately, civil war. Raziel's leaderless progeny, the Razielim, become victims to persecution from their brethren, and, now unrestrained by Kain's leadership, clan falls against clan. Nosgoth's humans capitalize on the escalating state of turmoil and distraction among the vampires to escape the blood farms, rekindling their own civilization.

Rebuilding cities and recovering skills over hundreds of years, the human slaves come to represent an increasingly credible threat to the vampire race. They form an army, and a devastating attack on their enemies' outposts begins. The clans settle their disputes and reunite in an uneasy alliance to quell the insurgency. The new war between both races for domination of Nosgoth ensues.

The vampire and human races' symbols.

There are currently two gameplay modes in which the game can be played.

In team deathmatch, both teams (Vampire and Vampire Hunter) fight each other with a goal of getting more kills than the opposing team (Maximum of 30). The game has two rounds with each team playing both the vampires and the vampire hunters. The game is over when both rounds are finished and the team with the highest overall score is declared the winner.

The second active mode, available only when classes pass level 10 is Siege mode, which focuses more on capturing locations. Humans are required to reach certain areas of the map, marked by special 'siege towers' and once occupied, a countdown begins during which the team must defend the area against Vampire attack. Once the timer has run down, the humans are rewarded 5 points for capturing an area. Conversely, to gain points the Vampires must simply kill as many humans as possible.

Nosgoth employs a player versus player system in which each match consists of two rounds. Teams comprise characters assigned to one of two races: vampires, designed around hack and slash combat; or humans, whose gameplay is styled after third-person shooters. Between rounds, teams switch to control the opposing race, and the team which accumulates the most points by fighting their counterparts wins the match. 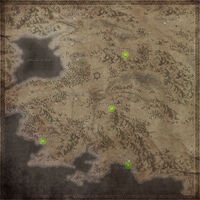 A map of the initial regions in Nosgoth. 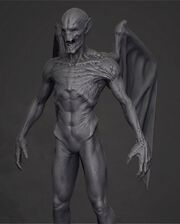 In February 2013, several gaming websites, including VG247, reported the discovery that publisher Square Enix's website domain managers had registered the domain "warfornosgoth.com", noting that this name referred to the Legacy of Kain series' established setting, Nosgoth.[2] In the same month, the Official Xbox Magazine's Edwin Evans-Thirlwell posted that a Passion Pictures artist, Richard Buxton, had mentioned working on a Legacy of Kain "animation pitch" in 2011 at his LinkedIn page, and publicized "some highly Kain-ish art" from Buxton's online portfolio. In a telephone call with Evans-Thirlwell, Buxton simply replied, "I'm not allowed to talk about that", and subsequently removed the storyboard, and all references to Legacy of Kain, from his profiles.[3][4][5]

In May 2013, it was highlighted that the phrases "War for Nosgoth" and "Nosgoth", and an associated file – "BCMPGame.exe" – had appeared in Advanced Micro Devices' Catalyst application profiles, alongside the titles of various recently-released and upcoming video games.[6][7][8] Further, it was found that an entry for a title named Nosgoth had appeared on Valve Corporation's Steam database, attributed to "Psyonix Comp". The entry had been renamed to "Nosgoth" from an earlier codename, "Black Cloth", and featured a logo and icon which both prominently displayed a shape resembling the dais of the Pillars of Nosgoth.[6][9][8] Additionally, the LinkedIn profile of composer Kevin Riepl contained an entry reading "Nosgoth (VG) Square Enix/Psyonix". After this was publicized, Riepl, like Buxton, edited the reference: first to read, "Sort of announced Title (?) :-| ? what? (VG) Square Enix/Psyonix", before instead declaring it an unannounced game.[6][10][11] Some final potential evidence came in the form of an image from a Psyonix Games artist's portfolio, depicting a "vampire creature concept".[12]

Through an exchange on Twitter, Kain voice actor Simon Templeman stated that he had not been contacted regarding any new Legacy of Kain titles, but expressed enthusiasm about a possible return to the role: "I haven't heard but he'll [sic] yeah...more soul reaving would be fun".[13][14]

Eventually, on June 8, 2013, Square Enix London community manager George Kelion, concerned that the continuing leaks might generate misguided speculation, reached out to websites to confirm the existence of an upcoming game named Nosgoth. VG247 reported that he stated the following:

"Nosgoth exists and is in active development, but is not a traditional Legacy of Kain action-adventure game [...] Nosgoth is set in the same universe as previous LoK games, but on a different branch to the Blood Omen and Soul Reaver series. The community should not be thinking of Nosgoth in terms of a single-player experience.
[...] We don't want people to get the wrong idea about Nosgoth following the AMD and Steam leaks ahead of its future official announcement. Nosgoth is not being developed by Crystal Dynamics [...] Crystal Dynamics are not working on a Legacy of Kain game.
[...] This isn't something we'd normally do, but we wanted to just give folks a bit more context for the direction, rather than just batten down the hatches."
―—George Kelion[15]

He issued a different statement to Eurogamer, but with similar details:

"We're aware that the community has been actively discussing rumours about a game currently in development called Nosgoth, after it was referenced in AMD's Crossfire Application Profile and the Steam database last week. While we can confirm that this game exists, is in active development and is set in the same universe as the Legacy of Kain games, it's not a traditional or even single-player LoK experience.
"Given the AMD and Steam leaks, it feels weird to have a bunch of info out there and we don't want the community to get the wrong idea, especially as the game won't be at this year's E3.
"We can also tell you that Nosgoth is not being developed by Crystal Dynamics, nor are they working on a Legacy of Kain game right now and while our game is set in the world of Nosgoth, it's very much on a separate branch to both the Soul Reaver and Blood Omen series.
"Sorry to be so cagey. There will be an official announcement in due course when we'll reveal Nosgoth properly, so we can't go into tons of detail just at the moment. Everyone at Square Enix is really excited by the game and we're all looking forward to lifting the veil of secrecy in the future.”
―—George Kelion[16]

Both announcements offered the following points of information: 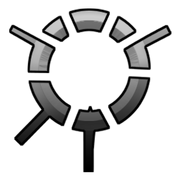 The Nosgoth Pillars icon from the Steam database.

Since confirming the existence of Nosgoth, Kelion, under the alias "Monkeythumbz", has divulged several additional details on the project at the Eidos Forums in response to fan questions:

On September 25, 2013, the official Announcement trailer for Nosgoth was released, showcasing the game as an asymmetrical third-person team-based multiplayer game.[24]

Following the trailer, George Kelion, Community Manager answered some questions regarding the game's placement in the timeline saying that it takes place after Kain casts out Raziel into the Abyss, during a time where he is mostly absent from his empire, and shows what happened to the Razielim during that time period.[25]

Nosgoth closed alpha begins next week in some territories