"This is where the bloody deed of my murder took place."
―Kain[src]

Ziegsturhl, also known as Ziegsturchl, was a small town in Nosgoth, located south of the Pillars of Nosgoth and east of the Cemetery. It was notable as the site of the human Kain's murder, at the hands of assassins hired by Mortanius. It only appeared as a playable location in Blood Omen: Legacy of Kain, but was depicted in the introduction of Blood Omen 2.

"And so I left - cold of heart and soul. Forced to the road, and the long, bitter night."
―Kain[src] 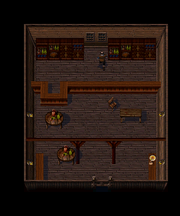 The tavern Kain visited just prior to his murder.

In the pre-Blood Omen era, Ziegsturhl was considered a "violent and seedy" place, secluded and undesirable.[1] On one of his aimless journeys across Nosgoth, Kain passed through the little hamlet, stopping at a tavern to sate his thirst.[BO1-C1] Its Barkeep shunned him, however, urging him to be on his way; despite Kain's offer of high reward, the tavern landlord would "stay open for no man in these dark times". "Things come with the night", he claimed, "that no sane man would welcome".[BO1-C1]

Thus forced back to the road and his travels, Kain left the bar, "cold of heart and soul". He did not get particularly far, though; as soon as he left the establishment, a band of brigands recognized the nobleman, and swarmed him. Finding all exits from the town blocked by carts, he was surrounded and outnumbered.[BO1-C1][2] There, in the streets, he was murdered, "cruelly impaled on his assassin's sword".[BO1-C1][3] Little did he know that these killers had been hired by the man who would soon offer him resurrection and vengeance - Mortanius, the Death Guardian, and fellow member of the Circle of Nine.[BO1-C2][BO1-C12]

After returning to life as a vampire and killing his assassins, Kain was forced to pass through the grim village once again, disgruntledly regarding it as the place where "the bloody deed of [his] murder took place". At his leisure, he could choose to slay or feed upon its inhabitants - who offered minimal resistance - and infiltrate some of the homes, where there were a few Flay artifacts for him to collect.[BO1-C2] The Barkeep was still manning his post, and, if Kain wished, he could exact revenge in a variety of ways - one entailed using Control Mind on him, and sending him to be sacrificed at the Flay Spirit Forge (curiously accessible via a secret door in the tavern).[4]

When Raziel explored the desolate wasteland of Nosgoth after his resurrection, he was unable to travel as far as the former Ziegsturhl region; the closest landmark he could access was the Tomb of the Sarafan.[SR1][5] Nonetheless, there was little evidence to suggest that Ziegsturhl had survived into the Soul Reaver era; many larger towns from the Blood Omen era had vanished without a trace. It may have been destroyed during the reign of Kain's empire; the Human Citadel was considered one of humanity's last major bastions in this time period.[6][SR1-C7][7]

After the third paradox he introduced much later in life, some of Kain's history was changed.[SR2-C10] In the fourth timeline he had created, his younger self collaborated with Vorador in raising a vampire army to take control of Nosgoth during the post-Blood Omen era.[BO1-C1][BO2-C3] Ziegsturhl, though still a relatively small settlement, remained intact in this time. On its path of conquest south towards Meridian - the capital of their enemies, the Sarafan - the army apparently passed through Ziegsturhl, and slaughtered its inhabitants, before moving on to Provance, and then Freeport.[BO2-C1][8] After the vampire army's defeat, the town presumably deferred to the Hylden Lord's regime, before Kain returned to power centuries later.[BO2-C1]

In the Blood Omen era, Ziegsturhl was a rudimentary forested settlement, and the smallest of the human dominions visited by Kain. Like Stahlberg, its few homes and buildings were constructed from wood, but its rooves were thatched, not tiled. The place had no paving, having been constructed on bare dirt and earth, though interiors had tiles and floorboards. A stream stemming from the Great Southern Lake separated the town proper from the wildernesses to the east. Wooden bridges allowed travelers to cross these waters, and lanterns lit the town by night.[BO1-C1]

Ziegsturhl was depicted with a total of five structures in Blood Omen: Legacy of Kain, three of which could be entered (though this is arguably not literal, and instead symbolic of a larger town, as Uschtenheim - with eight buildings in the same game - becomes significantly more elaborate in its Soul Reaver 2 portrayal).[BO1-C1][BO1-C7][SR2-C5]

Rest of the game

Kain's assassination in Ziegsturhl is a playable sequence in Blood Omen: Legacy of Kain, but was originally intended to be conveyed in the form of a cutscene, bridging the introduction and the game's second full-motion video. The cutscene was replaced in the final product because it had not turned out as well as Silicon Knights and Crystal Dynamics hoped. Still imagery from this deleted cinematic was included in Legacy of Kain: Defiance, and other frames can be seen at The Lost Worlds. The human Kain was depicted with blond hair in the excised FMV; at the time it was made, the developers had not yet decided to change his hair to black.[DEF][9]

Kain is unable to leave Ziegsturhl during the assassination sequence; both exits are blocked by toppled carts. One house can be accessed, but it is filled with peasant swordsmen and men-at-arms who will quickly kill him. Kain can fight and slay the brigands, and it is possible to exploit the game in such a manner that he can fend them off indefinitely, but they continually respawn, and the scene is scripted so that Kain has to be murdered for the story to proceed.[BO1-C1][2]